Our Team Is Growing! 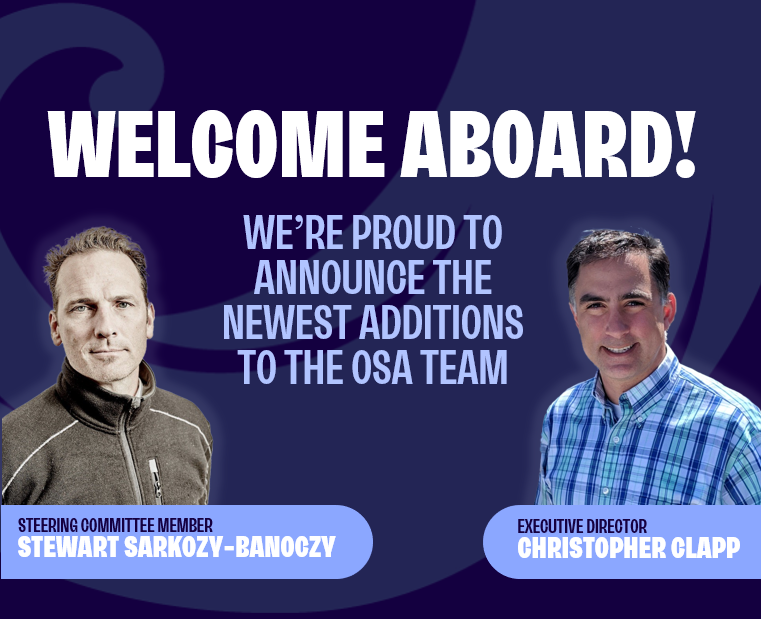 We are thrilled to announce the newest additions to the OSA team! Christopher Clapp will be joining us as our Executive Director and Stewart Sarkozy-Banoczy will be serving on our Steering Committee! Read the stories below to learn more Chris and Stewart.

After months of evaluating a global pool of impressive candidates, we are delighted to find an individual who will bring a wealth of knowledge and expertise to our growing partnership. Many of you may be familiar with Chris’ work on Long Island, New York, or from his volunteer-work with the Reef Resilience Network’s webinar series on ocean sewage. Chris is one of the rare few who has both a background in marine conservation and implementation of ocean-friendly sanitation solutions at the local scale.

Chris joins the OSA from The Nature Conservancy, where he has spent the last 18 years working as a marine scientist on Long Island. Chris has made a tremendous impact on The Conservancy’s approach to water quality. His work in shellfish recovery led him to the realization that there was a larger problem to resolve: nutrient pollution from cesspools and septic systems. Consequently, he became TNC’s internal expert on wastewater technology – he drove policies and funding for nitrogen pollution mitigation and also facilitated the development and implementation of sustainable technologies. Given his unique ability to collaborate effortlessly with scientists, agency experts and local stakeholders, Chris has developed a wide and varied network of individuals. Chris is enthusiastic to share his knowledge and experiences to help scale successful programs, which he has already done beyond Long Island in locations including New England, Florida and Hawai'i. He is deeply invested in community engagement and continues to serve on the water quality advisory committees for the Towns of Southampton and East Hampton.

As the new Executive Director of OSA, Chris is well positioned to hit the (water) running and will lead us in our journey to end wastewater pollution in coastal waters. He has already begun to join the Steering Committee in their work with the Multiplier team to articulate our theory of change and position the OSA for success when fundraising and implementing our goals.

We are very excited to welcome Stewart to the Steering Committee. Stewart brings unique experience as someone involved in the intersection of ocean health and indigenous partnership. He is no stranger to the OSA either  — he is a key representative for two of our partners: Resilient Cities Network and Precovery Labs!

Stewart is Director Global Strategic Partnerships and Development, and Senior Advisor for North America for the Resilient Cities Network, the evolved, city-led network of the 100 Resilient Cities (100RC) program. In these roles, special projects include the creation of the Resilient Community Impact Fund (RCIFund) and co-facilitation of the Resilience 21 (R21) Coalition. During the 100RC period Stewart served in variety of roles - Senior Advisor in Resilience Finance, Regional Director for Europe and the Middle East and Regional Director/City Relationship Manager for Latin America and the Caribbean, as well as leading the team that developed the 100RC challenge starting in 2013, through Context Partners, where he was partner and managing director.

Just prior, Stewart was the partnerships director for the Hurricane Sandy Task Force and Director of the Office for International and Philanthropic Innovation at HUD. Stewart spent the previous decade in the community development, sustainability and indigenous nation building arena, providing support for hundreds of tribal nations, specifically in the development of community development financial institutions and creating environmental, STEAM, and entrepreneurship programs and coursework in the tribal college setting.

Stewart is the founder of Precovery Labs, where creativity and community drive impact and awareness for clients like RISE- Coastal Resilience Innovations, Ocean Conservancy, Opportunity Finance Network, NDN Fund/Collective, and Conservatoire d’Littoral, as well as an active professional documentary and fine art photographer. He is also part of the Ocean Fellows team at the Center for Ocean Policy and Economics at Northeast Maritime Institute, Senior Advisor for Global Island Partnership, advisory committee and BlueSwell mentor for SeaAhead, rapporteur for SMILO-the small island organization and a member of Four Bands Community Fund’s board of directors.